Lexus keys made custom for you.

We are San Diego’s exclusive Lexus key cutting service. No other automotive locksmith specializes in Lexus keys like we do here at Prestige Locksmith. We have blank automotive keys ready to go for every Lexus vehicle ever made. More so, we utilize premium key blanks for Lexus vehicles. Only the best!

New Lexus car keys made at your door.

We make Lexus keys for all Lexus models ever produced. Don’t see your particular Lexus model listed below? No problem because our inventory of blank Lexus keys are updated on a regular bases to insure that when we arrive that we will be able to make your new Lexus keys. One call and your problem is solved!

We replace Lexus car keys for all of your needs.

No matter the issue, whether if you need a spare set of Lexus transponder keys, or spare keys for your Lexus, we can help you. The following is just a partial list of the Lexus key cutting and duplication services that we offer to the communities of San Diego. 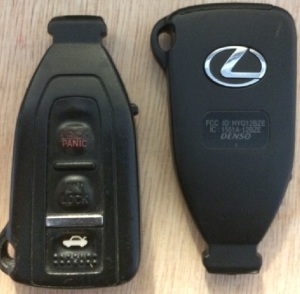 No other Lexus key making service in San Diego even compares to the fast service that we offer or the low cost for mobile key cutting services. Why would you even think about going somewhere else for your new Lexus car keys? Call us right now at (858)353-7430.