Everything that you don’t know about automotive keys 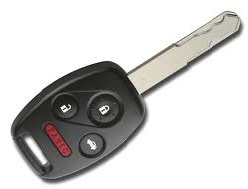 There are various types of automotive keys today. The days of mechanically cut keys are long gone. Now we have so many types of the transponder keys, fobs, Vehicle Anti-Theft System (VATS) keys, and a whole lot of others.

The following are a list of well-known automotive keys and their level of usefulness.

Metal Key: This is one of the oldest and well-known types of key in the automotive industry. It is a type of mechanical key that can only start your vehicle once it’s inserted into the ignition and turned in a clockwise manner. It doesn’t have the benefit of advanced security since the only way to prevent unauthorized usage is to mechanically disable the ignition’s ability to turn by using the metal key. They are cut mechanically and consist of ridges and cuts on one of its sides. However easy they are to use, they can only be inserted into the ignition from one side. Automotive locksmiths generally find this type of keys very easy to cut.

Laser Cut Car Key: These types of keys are more precise to use than the mechanical cut keys, most likely because lasers are used to cut them. They have grooves on both sides of the key shank, thus making them hard to duplicate. Autmotive locksmiths have to use specialized machinery like laser guns to cut them.

Transponder Car Keys: They consist of a microchip inserted in the key head. These types of keys are very complex and thus hard to cut or reprogram by inexperienced automotive locksmiths as they require highly enhanced and advanced machinery and tools. The transponder key has two precautions against fraudulent use;

First, it has a mechanical wafer that prevents the ignition cylinder from turning.

Secondly, the plastic head of the key contains a computer chip that’s connected to the car’s immobilizer called BCM.

If the car’s computer can sense the chip code, then it allows the car to start, but if it doesn’t sense the code, the key will turn in the ignition but not start.

Fob Key: This is a combination of the transponder key without the metal blade and a remote control. A fob key is basically a remote control, seeing as all it contains are buttons which can be used to lock and unlock the car doors. A normal fob key does not have a space for the metal key, but just has an enclosure in the car to insert the remote control. The fob is turned in the ignition, which allows the computer to recognize the chip and deactivate the immobilizer.

Proximity Keys (smart car key): These also work like the fob keys. The car’s computer recognizes the transmitter in the key and allows the door to be unlocked when the user is within close proximity. The driver can also start the car just by pushing a button on the key even without inserting it in the ignition. They are also called smart car keys. The major disadvantage of these types of keys is that there’s the likelihood of owners accidentally starting the cars.

VAT Key: They use an advanced vehicle anti-theft system which consists of a resistor chip that’s embedded in the blade that works when it comes in contact with the ignition which offers the extra security. This type of key is very hard to duplicate because of its resistor chip.

Master Car Key: These are not used by vehicle owners. They were used mostly by automotive locksmiths to cut a key or replace lost ones. Master keys are outdated due to the emergence of better and more advanced technology.